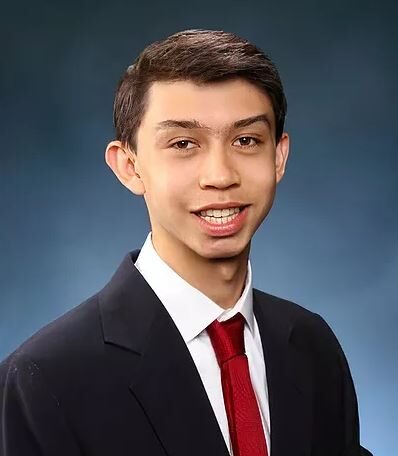 Our 2020 Distinguished Graduate is a shining example of a young man who is steadfast in following Jesus and in his commitment to his Catholic faith. Ethan Johanson, a recent graduate of Jesuit High School, is an example to our St. Clare community of how to listen and respond to God’s call to serve others.

When asked to describe their son as a young boy, parents Michael Johanson and Lourdes Diaz-Johanson described him as fun-loving, observant, and thoughtful. Many who know him would use the same language to describe the young man Ethan is today – saying he listens intently, and believes that listening, as a way of simply being with others, is more important than talking.

From a young age, Ethan has been goal-oriented and willing to take on a challenge. During his time at St. Clare School, Ethan made developing his Christian character traits a top priority, striving for academic excellence and a love of learning, being a responsible citizen, and an effective communicator. At St. Clare, Ethan served as a peer mediator, helping younger students effectively work through conflict. He was also involved in parish ministry as an altar server throughout his St. Clare school years. Upon graduation from St. Clare, Ethan was awarded the ‘St. Clare Award’ honoring a graduating student who has consistently embodied all the Schoolwide Learning Expectations.

After graduating from St. Clare, Ethan continued to excel academically at Jesuit High School while also serving his community. Ethan continues to be a fixture in our parish, serving whenever he is asked, as a lector and a Eucharistic minister as well as a member of our newly reinstated Peace and Justice Committee. At Jesuit, Ethan participated in many service trips and projects, including the Ignatian Family Teach-In for Justice in Washington, D.C., Volunteering at the Hurtado Center teaching English as a second language, and participating as a Presenter in the ‘Walk a Mile in My Shoes’ Simulation created by Jesuit Refugee Services, educating students on the realities of refugee camps. During the fall of his Senior year, Ethan was able to explore his interest in politics by interning in the Portland Office of Senator Ron Wyden.

Ethan is unafraid to ask the hard questions; allowing him to open his heart and mind to the trials and hardships of others. In the Summer of 2018, Ethan and nine other Jesuit students traveled to the Arizona-Mexico border to gain a new perspective on immigration by listening to stories of migrants seeking refuge in the United States.

Ethan, now a freshman at Georgetown University, plans to study political science. He is considering a career in politics continuing to work for Peace and Justice using his voice to speak for those that don’t have the opportunity.

Ethan, you make our community proud. Thank you for being a model example of a St. Clare School Distinguished Graduate.  Congratulations!

A Catholic, parish-school community rooted in Gospel values and dedicated to the spiritual and educational development of the whole child.