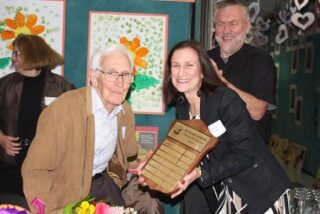 Please join us in congratulating Robert Molin of the St. Clare School Class of 1932, the recipient of our Distinguished Graduate Award for 2014.  Mr. Molin was recently honored at our Alumni Dinner held at the school on May 3, 2014. Here is an excerpt from the award presentation speech, delivered at the event by Kevin Tyree, School Advisory Council Chair:

[Mr. Molin] graduated 82 years ago, one of two boys and four girls in the class of 1932. A true patriot, he was married to his wife Georgia for only one month before the attack on Pearl Harbor happened, and he decided to join the Navy. There, he rose to the rank of Lieutenant Captain, assisting the war effort by delivering fuel to various islands in the Pacific.

During his working years, he served as president of the Retail Trade Bureau, as well as past-president of the ARC during a critical time of change focusing on better treatment for the developmentally disabled. He was actively involved in all things at St. Clare: he was president of the PTA, and served as the first Pastoral Care Council president. He was a Eucharistic minister and lector, and was active in setting up and preparing parish dinners. Until a couple of years ago, his Lemon Meringue pies were a fixture at numerous funeral repasts.

Mr. Molin attends a monthly prayer group at Loyola, attends Mass at St. Clare as often as possible, and when he cannot make it in person – he says it to himself at home. He also reads the bible every day and says the Rosary at noon. He continues living the gospel by being present to all others he meets. One of his children suggested the following Gospel quote, which sums up his positive outlook and way of living:

“I choose to walk in forgiveness towards everybody all the time. I forgive others as Christ has forgiven me, I am not offended nor do I take up another’s offense. Because I obey the Lord and choose to set my will to forgive, I have great peace and joy in my life.”

Thank you, Mr. Molin, for being a part of our community and blessing us in so many ways.

A Catholic, parish-school community rooted in Gospel values and dedicated to the spiritual and educational development of the whole child.